Excersicing
sports
on fields
made of corn

Today newspaper “De Telegraaf” published an article about the progress and status of the developments of our bio degradable turf solution. Read the full article in dutch here.

Find below the translated English version and the downloadable Dutch article.

Excercising sports on fields made of corn 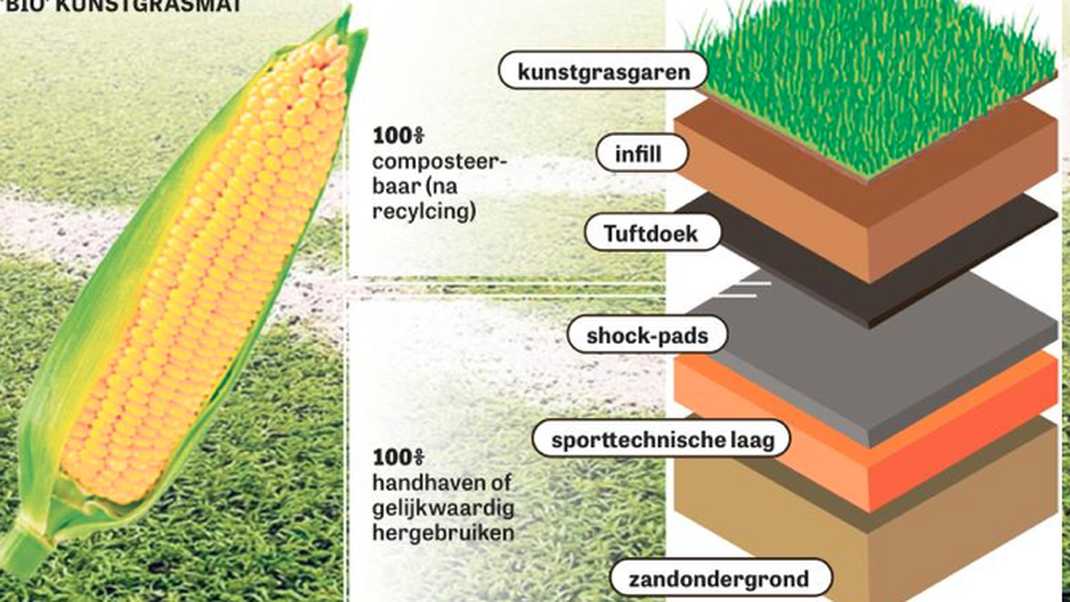 The Senbis laboratory in Emmen has been working feverishly for a year now on the new technique, which should be a solution to the problem of the waste pile of current synthetic turf. “As a raw material for this artificial grass, we use biopolymers, for example made from corn. This is the egg of Columbus, because unlike the current generation of turf, it will be compostable in the future. The compost can then be used in agriculture or parks,” says project manager Jochem Knol on behalf of Sweco, formerly Grontmij.

The new grass consists of polyethylene from which the grass yarns are made. These are hooked onto a polypropylene substrate. This carpet is then glued with latex. All this together leads to a raw material that is inextricably linked and can no longer be separated. “Now grass mats are waste when they’re at the end of their life. When reused, only roadside posts could be made from them. The government therefore wanted a solution to the social discussion that arose about the artificial grass bulges at waste processing plants in Barneveld and Dongen, for example,” says the project leader.

Commissioned by the Ministry of Health, Welfare and Sport, the Rijksdienst voor Ondernemend Nederland has made money available for research. A team of ten people has been working on the new synthetic turf for a year now. The patent lies with Senbis, who developed the technology.

The new turf is not a solution to the discussion that arose about the rubber crumb that lies in the artificial turf. There was a lot of discussion and commotion about this a few years ago, because it was said to be carcinogenic. Jochem Knol knows that there is now another biodegradable solution for these grains.

“It seems to be a simple problem, but in practice it’s complex. The turf is played on, so it is exposed to wear and tear. There are certain requirements of the world football association FIFA that the artificial turf has to meet, just like the hockey and tennis association,” says the project manager. The expected development costs of the new bio-artificial grass to date have been €1 million, of which the national government has paid approximately €600,000.

Marijn de Graaf van Senbis with the ‘yarn’ of corn polythene, on which the turf will be woven.
Ⓒ PHOTO JOS SCHUURMAN

Synthetic yarn producer TenCate is also participating in the consortium. The company earns millions from the current generation of turf, which cannot be reused. In the most recently filed annual report it appears that the company from Nijverdal generated €322 million in synthetic turf sales in 2017. “Nevertheless, we are pleased that these market parties are participating in the consortium. The world will soon be open to us,” says Knol. The feasibility study for the new synthetic turf has just been completed. The intention is to put the first trial mat into use next year.

There are approximately 3500 artificial turf pitches in the Netherlands, almost all of which have supplanted the traditional turf on the sports field. Doesn’t the consortium have any competition from the familiar classic, real turf? Municipalities in many cases make the decision to invest in replacing the existing artificial turf,” says the expert.

“Of course we have a competitive product. Plastic waste is an important issue, which is why we expect that there will be a lot of demand for a sustainable cinema pitch”.

Our customer support will handle and follow up within the next 24 hours.

We’ll deliver your requested document as soon as possible!